Presentation of the feet or buttocks of the foetus. 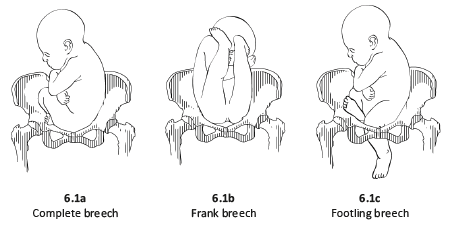 – The cephalic pole is palpable in the uterine fundus; round, hard, and mobile; the indentation of the neck can be felt.
– The inferior pole is voluminous, irregular, less hard, and less mobile than the head.
– During labour, vaginal examination reveals a “soft mass” divided by the cleft between the buttocks, with a hard projection at end of the cleft (the coccyx and sacrum).
– After rupture of the membranes: the anus can be felt in the middle of the cleft; a foot may also be felt.
– The clinical diagnosis may be difficult: a hand may be mistaken for a foot, a face for a breech.

Before labour, external version (Chapter 7, Section 7.7) may be attempted to avoid breech delivery.

If external version is contra-indicated or unsuccessful, the breech position alone – in the absence of any other anomaly – is not, strictly speaking, a dystocic presentation, and does not automatically require a caesarean section. Deliver vaginally, if possible – even if the woman is primiparous.

Breech deliveries must be done in a CEmONC facility, especially for primiparous women.

The footling breech presentation is a very unfavourable position for vaginal delivery (risk of foot or cord prolapse). In this situation, the route of delivery depends on the number of previous births, the state of the membranes and how far advanced the labour is.

– Monitor dilation every 2 to 4 hours.
– If contractions are of good quality, dilation is progressing, and the foetal heart rate is regular, an expectant approach is best. Do not rupture the membranes unless dilation stops.
– If the uterine contractions are inadequate, labour can be actively managed with oxytocin.

Note: if the dilation stales, transfer the mother to a CEmONC facility unless already done, to ensure access to surgical facility for potential caesarean section.

– Insert an IV line before expulsion starts.
– Consider episiotomy at expulsion. Episiotomy is performed when the perineum is sufficiently distended by the foetus's buttocks.
– Presence of meconium or meconium-stained amniotic fluid is common during breech delivery and is not necessarily a sign of foetal distress.
– The infant delivers unaided, as a result of the mother's pushing, simply supported by the birth attendant who gently holds the infant by the bony parts (hips and sacrum), with no traction. Do not pull on the legs.
Once the umbilicus is out, the rest of the delivery must be completed within 3 minutes, otherwise compression of the cord will deprive the infant of oxygen.
Do not touch the infant until the shoulder blades appear to avoid triggering the respiratory reflex before the head is delivered.
– Monitor the position of the infant's back; impede rotation into posterior position.

If the infant’s back is posterior during expulsion, take hold of the hips and turn into an anterior position (this is a rare occurrence).

• With thumbs on the infant's sacrum, take hold of the hips and pelvis with the other fingers.
• Turn the infant 90° (back to the left or to the right), to bring the anterior shoulder underneath the symphysis and engage the arm. Deliver the anterior arm.
• Then do a 180° counter-rotation (back to the right or to the left); this engages the posterior arm, which is then delivered.

6.3a - Turning the infant to bring down the anterior shoulder 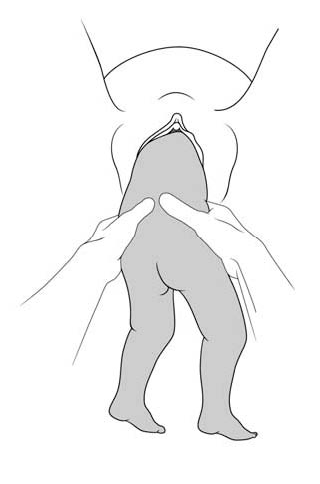 6.3b - Downward traction and descent of shoulders along the midline (sacral-pubic) axis 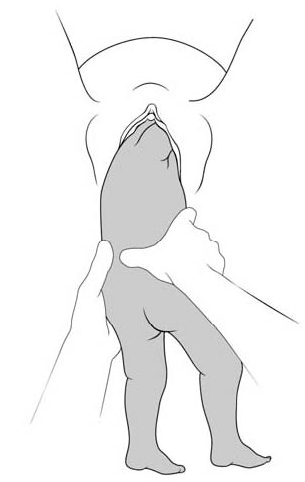 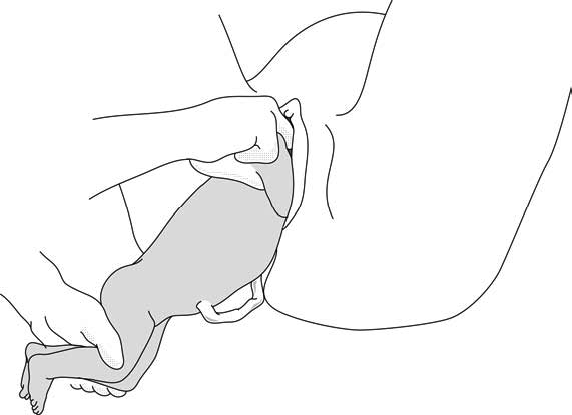 In case the previous method fails:
• Turn the infant 90° (its back to the right or to the left).
• Pull the infant downward: insert one hand along the back to look for the anterior arm. With the operator thumb in the infant armpit and middle finger along the arm, bring down the arm (Figure 6.4a).
• Lift infant upward by the feet in order to deliver the posterior shoulder (Figure 6.4b).

6.4a - Bringing down the anterior arm 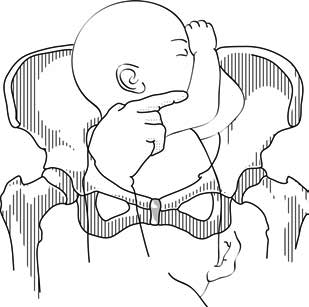 6.4b - Delivering the posterior shoulder 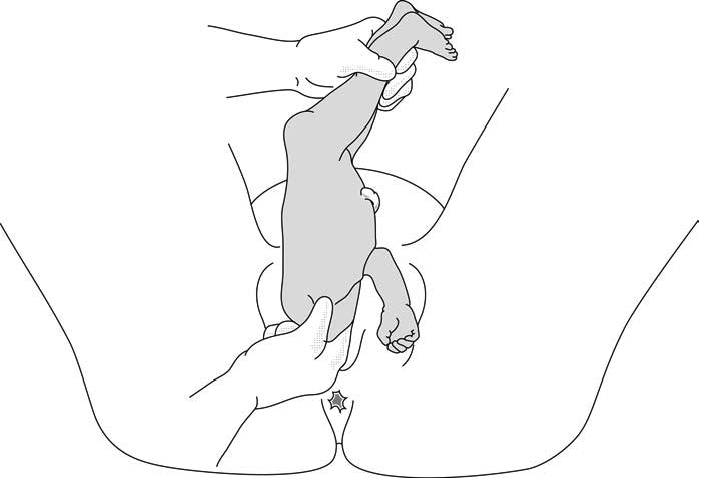 The infant's head is bulkier than the body, and can get trapped in the mother's pelvis or soft tissue.

• After the arms are delivered, the infant is grasped by the hips and lifted with two hands toward the mother's stomach, without any traction, the neck pivoting around the symphysis.
• Having an assistant apply suprapubic pressure facilitates delivery of the aftercoming head. 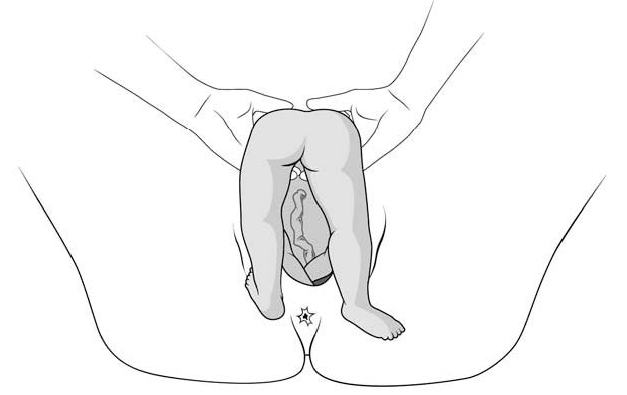 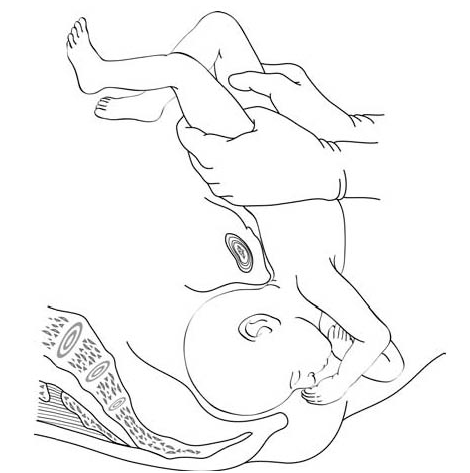 6.6a - Step 1
Infant straddles the birth attendant's forearm; the head, occiput anterior, is lowered to bring the occiput in contact with the symphysis. 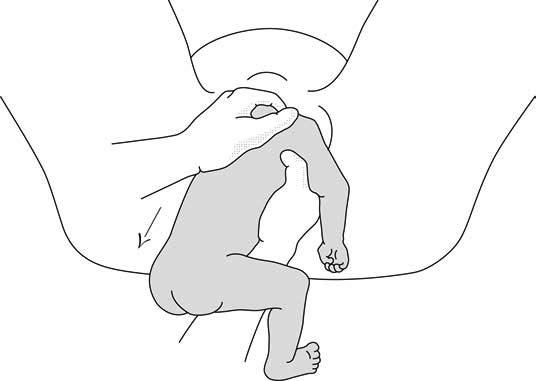 6.6b - Step 2
The infant's back is tipped up toward the mother's abdomen. 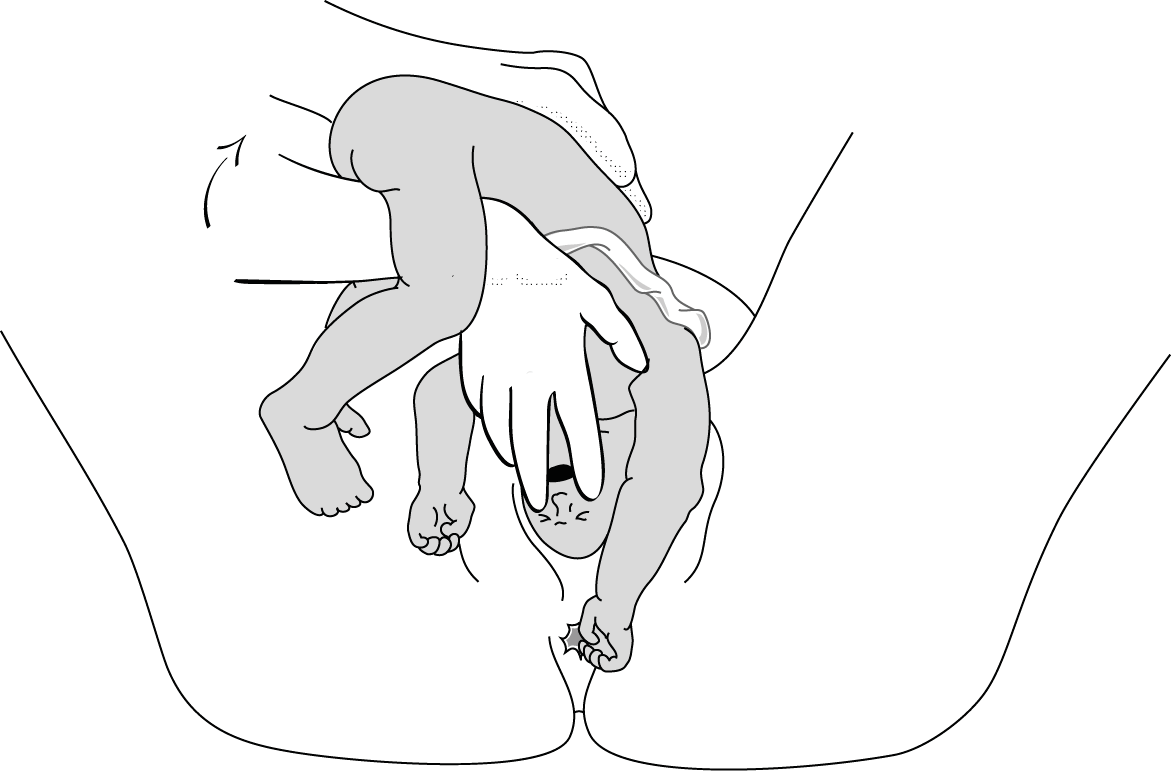 This procedure can only be performed by an operator experienced in using forceps.