The report will be composed in three parts: description, analysis and recommendations.
It should be short (2 to 3 pages) but sufficiently detailed to inform decisions on further action.
It must be dated and the name of the country and the region specified, as well as the author’s (or authors’) name and position.

Past cholera history and historical data at local and national levels

– No prior history of cholera
– Irregular outbreaks occurring every few years
– Seasonal (occurring in the rainy or dry season?) and current season
List locations typically affected and the attack rates (from several outbreaks, if available). 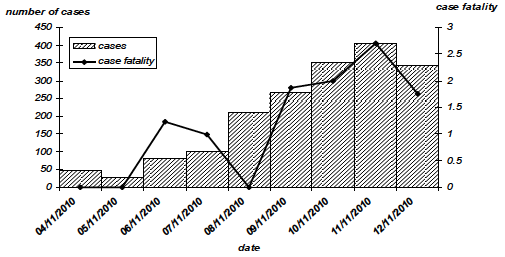 – Geographical distribution of cases (case mapping): if the current cholera data included patient origin, the number of cases coming from distinct populations (neighbourhood, village, or district) can be added to the map described in General Context. If cases are concentrated in a specific area, propose explanations as to why a Citation a. Mapping of cases may give an indication of the likely source of Vibrio cholerae. For example, the sudden appearance or augmentation of cases in a single location may indicate that individuals were infected at the same place at approximately the same time such as, for example, the same water point.  .

Confirmation of the diagnosis

Indicate:
– If suspect cases conform to standard clinical case definition for cholera;
– The number of stool samples collected for culture and to which laboratory samples were sent. If a culture result is known, indicate the strain and drug sensitivity.

− Indicate if:
• The current number of beds (or the potential bed capacity) is sufficient with respect to the expected number of cases;
• The current number of medical and non-medical staff is sufficient and if they have previous cholera experience;
• The quality of medical care provided is acceptable and standardized treatment protocols are used;
• Hygiene practices being observed (isolation of cholera patients from other patients; appropriate hand-washing) are acceptable;
• The stock of RL and ORS is sufficient to cover the immediate needs and there is a functioning supply chain to efficiently renew stock;
• Water is potable (include any water quality test results), the quantity available is sufficient (around 60 litres/person/day) and the water point(s) is on-site;
• There is sufficient number of functioning and clean latrines (at least one latrine for 20 patients).

Response capacity outside the health facility

– Indicate:
• If there are other facilities capable of providing cholera case management (and the number);
• The locations that could be used if current facilities are insufficient or poorly adapted;
• If the local authorities have officially declared a cholera outbreak.

– Describe the principle water sources, if they are accessible, quantities available and water quality. Include any water quality test results.

– State whether a cholera outbreak is unlikely, probable (based on the number of patients fulfilling the case definition), or confirmed (based on culture results).
– Determine the level of risk of a severe outbreak, according to the risk factors described in Section 2.6.2.
– Estimate the number of cases expected.
– Estimate the quantity of essential medical and logistic (tents, beds, equipment for water/sanitation, etc.) supplies needed.
– Determine the response capacity of the health system and other actors present and identify the gaps.
– Evaluate the potential place of reactive vaccination (Section 4.7).

Propose the curative and preventive interventions to prioritize for each geographic area investigated based on the analysis. See Chapter 3 and Chapter 4.

Note: if there is no cholera outbreak, strengthen diarrhoeal disease surveillance and establish cholera preparedness plan if not yet done.