Measles is an extremely contagious acute viral infection, characterized by a fever and skin rash with signs of respiratory infection. It mainly affects children. There is no specific treatment for measles.

The introduction of an effective inexpensive vaccine in the 1960s helped reduce the scope of the disease on a global level. However, measles is still a major public health problem in countries where low vaccination coverage (in Africa and Asia, mainly) has allowed the disease to persist and give rise to large-scale outbreaks (Figure 1.1).

In 2010, 181 countries together reported more than 254,000 cases of measles a Citation a. For the most recent data, see the site:
http://www.who.int/immunization_monitoring/diseases/measlesregionalsummary.pdf  . According to the WHO, despite overall improvements in epidemiological surveillance, these figures are probably still greatly underestimated. 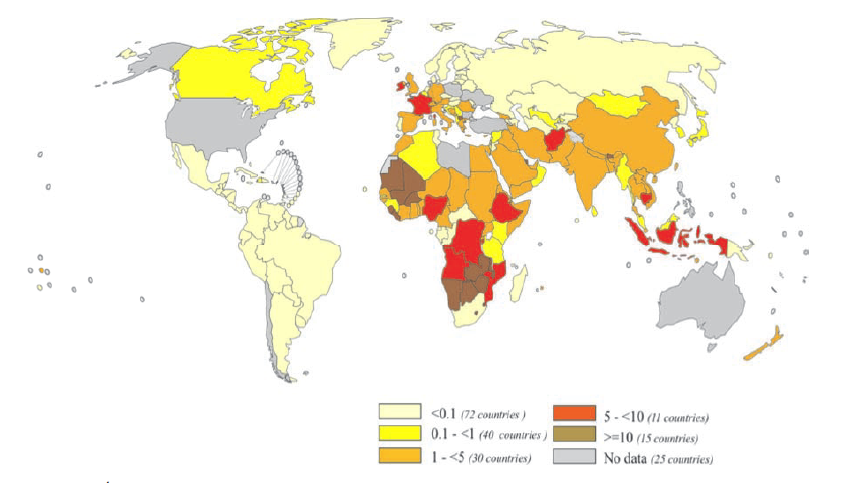 Measles is caused by a paramyxovirus (morbillivirus), whose only reservoir is man (infected individuals, including those who are asymptomatic).

The terms “clade” and “genotype” are used to describe the genetic characteristics of wild viruses.

Molecular characterisation of measles viruses provides a method for identifying their geographical origin and monitoring their spread and any genotype changes. It is essential for documenting the impact of measles programs at the global level.

Transmission occurs primarily by direct contact with nasal or throat secretions, by the airborne route and, rarely, by indirect contact.

Viral droplet nuclei shed by the infected individual infect the healthy individual by penetrating the nasal, oral, laryngeal or conjunctival mucosa. The virus can remain suspended in the air for more than two hours, but does not survive long on objects or surfaces.

The contagious period begins three to four days before the rash appears, and continues for up to five days after the rash begins. It can be longer in malnourished or immunodepressed individuals.

Immunity can be acquired naturally (by contracting the disease) or by vaccination.

In infected individuals, IgM antibodies are detectable as soon as the rash appears and persist for about a month. IgG antibodies appear a few days later and are detectable for life. Natural infection therefore confers lifelong protection.

Maternal antibodies, transmitted via the placenta and breast milk, protect infants for the first few months of life and then gradually disappear around age 5 to 12 months.

Once these antibodies have disappeared, all children become “susceptible,” that is, at risk of developing the disease if infected.

It is estimated that in an unvaccinated population, nearly all children will develop measles before adolescence. While the age of occurrence is determined by the probability of contact with an individual that has measles, children under 5 years – and more specifically, under 3 years – are usually affected most.

When vaccination is administered, a small percentage of those vaccinated fail to develop immunity (vaccine efficacy 80-95%). Those individuals will not be protected by the vaccine, and will be at risk of developing the disease if infected.

In industrialised countries, the case fatality rate is low and the disease often wrongly considered benign. The WHO estimates that 4% of deaths in children under age 5 years worldwide are attributable to measles [4] Citation 4. World Health Organization. The global burden of disease: 2004 update. 2004. WHO Press, Geneva 27, Switzerland, World Health organization WHO.
http://www.who.int/healthinfo/global_burden_disease/GBD_report_2004update_full.pdf , and that 90% of measles-related deaths are in children under age 5 years.

During outbreaks in developing countries, the overall CFR (both early and late) can range from 3 to 15%. In emergency settings (refugee camps, displaced populations, etc.), in areas where the prevalence of acute malnutrition is high, and in poor urban areas, it can be over 20% [5] Citation 5. Wolfson LJ, Grais RF, Luquero FJ, Birmingham ME, Strebel PM. Estimates of measles case fatality ratios: a comprehensive review of community-based studies. Int J Epidemiology. 2009;38:192–205. .

Three recent retrospective measles mortality surveys [6] Citation 6. Grais RF, Dubray C, Gerstl S, Guthmann JP, Djibo A, Nargaye KD, Coker J, Alberti KP, Cochet A, Ihekweazu C, Nathan N, Payne L, Porten K, Sauvageot D, Schimmer B, Fermon F, Burny ME, Hersh BS, Guerin PJ. Unacceptably high mortality related to measles epidemics in Niger, Nigeria, and Chad. PLoS Med. 2007 Jan;4(1):e16.  confirmed that the CFR for children under 5 years was markedly higher than for older children (Figure 1.2). In urban settings, the CFR was highest in children under 1 year and decreased with age. The CFR in rural settings was higher than in urban settings for all age groups. The CFR found by the surveys was higher everywhere than previously reported, because the majority of deaths that occurred at home had not been counted. 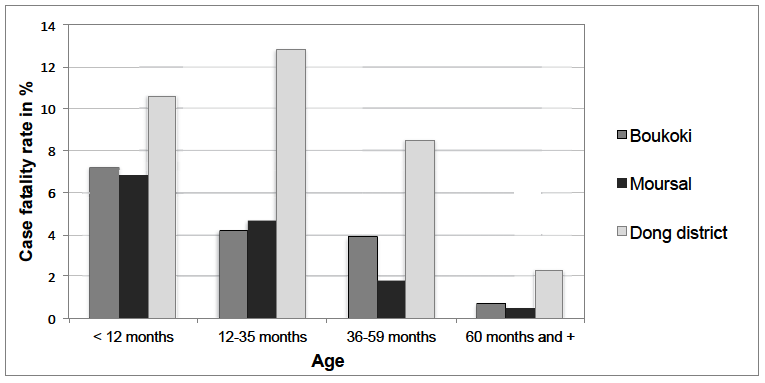