According to the WHO, worldwide measles vaccination coverage in 2011 had reached 84% (Figure 1.3) a Citation a. For the most recent data, see the site:
http://www.who.int/immunization_monitoring/diseases/measles/en/index.html  . However, only 65% of the world’s countries had achieved vaccination coverage equal to or greater than 90%. 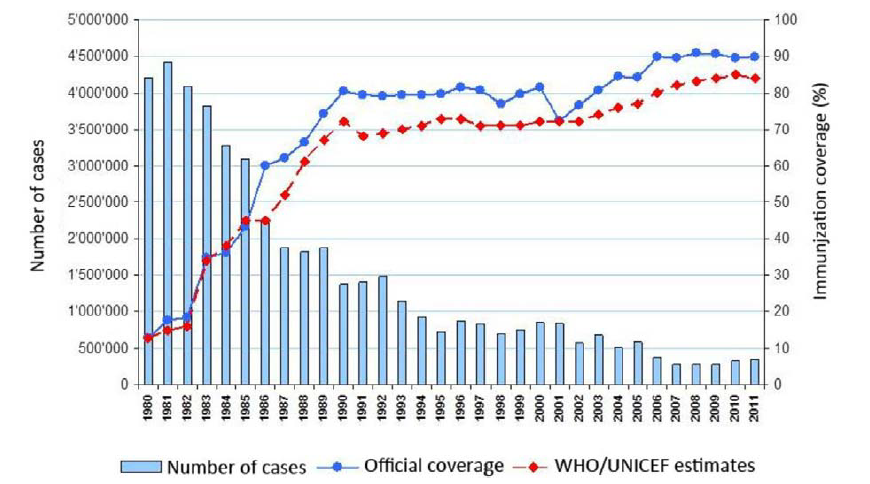 Vaccination helps control measles and changes the epidemiology of the disease.

Those changes are due to:
– The vaccine’s mechanism of action: the vaccine protects individuals from infection; it reduces the number of susceptible individuals and, as a result, transmission of the virus.
– Vaccination coverage: when more than 90% of the population is immunised, transmission is reduced and the risk of exposure to the virus is low for the whole population. This is known as community, or herd, immunity; non-immunised people are protected by the size of the immunised group around them.

Incidence, mortality and time between outbreaks

When vaccination coverage increases and stays at a high level, there is a decline in the incidence and more widely-spaced outbreaks. Only maintaining very high vaccination
coverage (over 95%) can prevent outbreaks.

The figure below shows schematically how the measles incidence and risk of an outbreak vary as a function of vaccination coverage obtained by primary vaccination (one dose
starting at age 9 months).

The group of susceptibles

This group includes unvaccinated people and people who did not respond to vaccination (the protection conferred by a single dose of vaccine administered starting at age 9 months
ranges from 80 to 95%, depending on the study).

Example: Estimating the number of susceptibles in a population of 110,000 children under age 5 years:

If measles immunisation activities remain steady in a population (one dose for children ages 0-11 months) and achieve 80% coverage, that means that each year, the unprotected portion of the 0-11 month-olds for that year are added to the susceptibles already present in the population.

If there is no additional immunisation activity (administration of a second dose and/or vaccination campaign), the virus will continue to circulate in the population, but transmission will be low and few cases will occur.

The number of susceptibles will continue to build from year to year, until it reaches some critical mass. There will then be a significant increase in the number of cases, or even an
outbreak affecting the susceptibles in all age groups (including the oldest). If it were a large-scale outbreak, the majority of susceptibles in the population would be infected and would then be immunised. A new group of susceptibles would begin to form from the new births that year (Figure 1.5).

Figure 1.5: Example of accumulation of susceptibles over several years 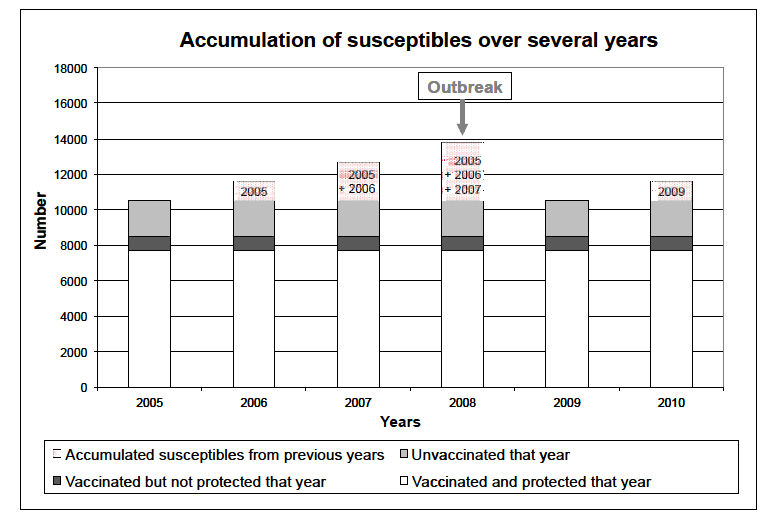 Note: it is assumed that there were no susceptibles from 2004. In 2006, the unprotected fraction of children born in 2005 would join that year’s susceptibles (nonresponders and unvaccinated). The number grows in this way from year to year.

Proportion of vaccinated among the cases

Increasing the vaccination coverage leads to a sharp decline in the number of cases. At the same time, however, the proportion of vaccinated among the reported cases grows. Most of those cases are therefore due to vaccine failure.

Example of how the proportion of vaccinated among measles cases varies with vaccination coverages of 40 and 80%:

1.2.2 Risk factors for an outbreak

It is important to clearly identify the risk factors for outbreaks and prioritise prevention and response activities. The risk factors have to do with the size of the at-risk group and the frequency of exposure to the virus.

– If the birth rate is high (≥ 4%), the proportion of children (and thus the size of potential susceptibles group) is large.
– If the vaccination coverage is too low, the number of susceptibles will continue to accumulate from year to year, rapidly reaching critical mass.

Frequency of exposure to the virus

The higher the population density, the greater the number of people exposed to an intense transmission focus, due to crowding. The risks are higher for:
– people living in poor urban settings;
– displaced or refugee populations;
– people in contact with a case in health care facility waiting rooms (poor ventilation, people gathered together and the presence of measles cases);
– people in institutional settings (paediatrics departments, schools, orphanages, feeding centres, prisons, etc.);
– a sick child’s family members (household transmission).

When access to care is poor, fewer children are vaccinated (reduced access to vaccination) and measles is diagnosed later (more people at risk of contact with the patient).

In tropical areas, transmission increases at the end of the rainy season and intensifies throughout the dry season.
In temperate areas, cases typically occur at the end of winter and beginning of spring.
Classically, the disease spreads from high population density to low population density areas.
In rural settings, where transmission is lower, epidemic outbreaks are generally localised, more widely spaced and smaller in scale than in urban settings.

Outbreaks can last anywhere from a few weeks to several months.
A study on five urban outbreaks where there was no early intervention showed (Figure 1.6) outbreaks lasting longer than six months, and a widely-varying number of cases (from 2,500 to more than 53,000).

Figure 1.6: Duration and size of outbreaks; some examples 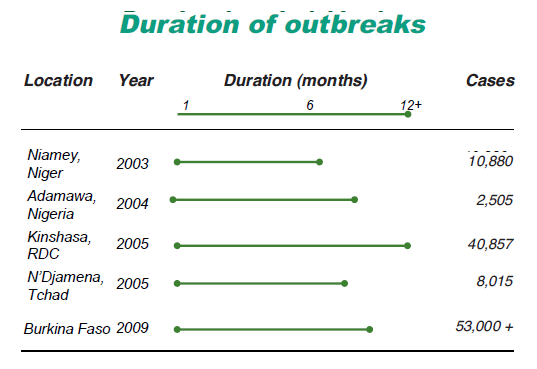 The duration and size of outbreaks are related to:
– the size and density of the exposed population;
– how fast the disease spreads;
– the prior vaccination coverage and the size of the susceptible cohort;
– how fast outbreak response vaccination is put in place.

The reproductive ratio (RR) is the average number of secondary measles cases produced from one source case. It is the indicator that allows to estimate how fast an outbreak is spreading. A low RR means that the outbreak is moving slowly.

It depends on several factors; the three main factors are:
– the contagious period of the disease;
– the probability of disease transmission at each contact;
– the number of susceptible people in the population.

In a completely susceptible (unprotected) population, one person infected with the measles virus will infect from 12 to 20 people [1] Citation 1. Grais R.F., et al. Estimating transmission intensity for a measles epidemic in Niamey, Niger: lessons for intervention. Transactions of the Royal Society of Tropical Medicine and Hygiene, 2006. 100(9): p. 867-873.
http://ento.psu.edu/publications/graisetal2006.pdf . In areas where part of the population has been vaccinated or infected by the virus previously, the RR is lower.

Various studies conducted during African epidemics from 1987 to 2005 have showed RRs ranging from 2.5 to 4.6.

The two graphs below show the proportion of cases avoided in children ages 6 to 59 months (Figure 1.7) and 6 months to 15 years (Figure 1.8), as a function of the time to implement vaccination.

Figure 1.7: Percentage of cases avoided as a function of vaccination coverage and time to vaccination in children ages 6-59 months, Niamey, Niger, 2004 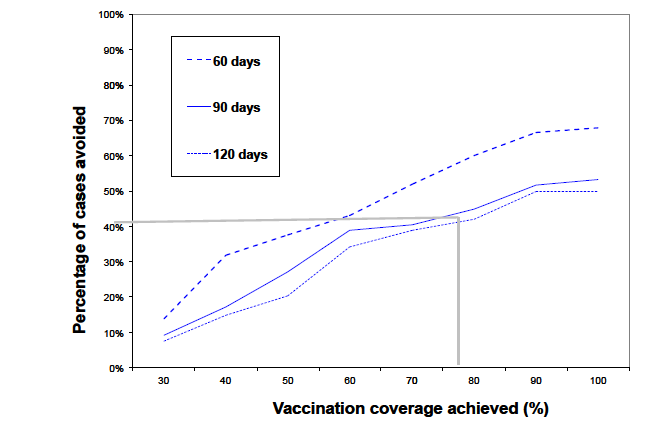 Figure 1.8: Percentage of cases avoided as a function of vaccination coverage and time to vaccination in children ages 6 months-15 years, Niamey, Niger, 2004 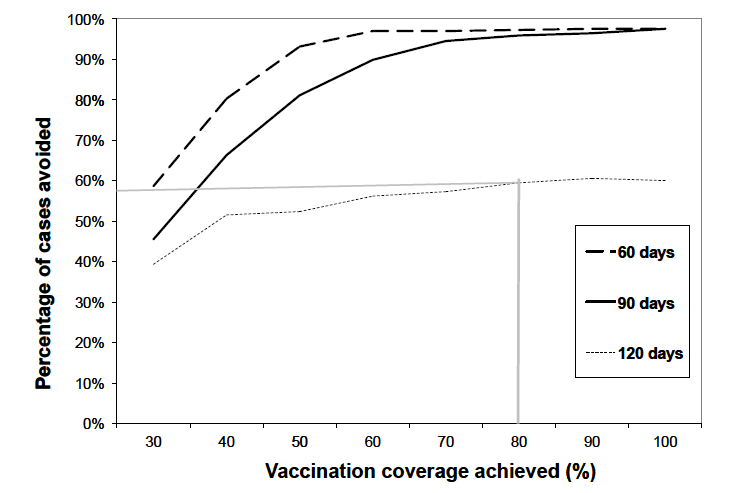 The models show that a vaccination campaign that is started early, targets children up to age 15 years, and achieves a high vaccination coverage helps avoid a very large number of
cases.

In practice, the decision regarding which age groups to vaccinate has to be carefully weighed according to the available epidemiological data and the resources that can be
mobilised.

Two examples of measles outbreaks and vaccination responses are presented in Appendix 1.