The aim of the investigation is to collect the data needed to confirm the outbreak and analyse the initial actions taken in response.
The effectiveness of the response (controlling the spread of the outbreak by organising a large-scale vaccination campaign) depends primarily on how quickly the outbreak is identified.
The investigation must therefore start at the first warning signs, i.e., an increase in the number of cases compared to the same period in previous (non-epidemic) years.
In principle, if the epidemiological surveillance system is functional and responsive, the alert will be issued as soon as the first cases appear.

The description of an outbreak rests on the case definition. The case definition should be clear, simple and standardised, so that it can be used at all levels from health post to hospital. It should remain constant for the duration of the outbreak. Standardisation allows uniform data collection, i.e., the number of cases and deaths, the age groups at risk and the geographic extent.

The following (WHO-recommended) case definitions are given as an illustration:

All case definitions are a compromise. A sensitive but relatively nonspecific definition will include all of the cases, but will also include patients who are not cases (overestimation).

Conversely, if the definition is highly specific, all cases counted will be true cases, but some true cases will not be included (under estimation).

Most of the time, the diagnosis is clinical (based on the definition of a suspect case).

Prior to the eruptive (rash) phase, suspicion of the disease is based only on contact with a patient and no past history of measles. After the eruptive phase, it requires a differential diagnosis from other febrile eruptive illnesses and drug reactions (Chapter 5).

Laboratory testing is crucial to confirm an outbreak, but inability to get laboratory confirmation must not delay outbreak management.

Specimen collection equipment should be made available at all levels (hospitals, health facilities, etc.) at the start of the high-risk season, so that samples can be taken at the first contact with the patient.

At a minimum, specimens should be collected on the first five to ten reported cases in an affected geographic area.

Serological testing for IgM antibody is most sensitive if done between the 3rd and 28th day after onset of the skin eruption. It should therefore be done during that period, if possible. After labelling the tube and completing the sample register (Appendix 2), quickly send the tube to the laboratory, accompanied by a completed information form (Appendix 3).

Follow the specimen collection procedures recommended by the country’s Ministry of Health.

For simplicity and safety, dried blood samples or oral fluid swabs are preferred to serum, because:
– they have nearly equivalent sensitivity and specificity for detection of specific IgM antibodies;
– they do not require venipuncture;
– they permit IgM detection and strain identification;
– the samples are stable for about 7 days without a cold chain.

The methods for finding cases will depend on the population in question and the existing surveillance system. Cases are looked for and counted:
– at hospitals, health facilities, dispensaries and feeding centres (counting the cases in the registers) first;
– in schools and other places where there are groups of children;
– more rarely, in the villages, by questioning the village heads and visiting the families of reported cases, or cemeteries.

If health care facilities do not have measles registers, put them in place (Appendix 5).

To avoid double reporting, it is essential to specify how transferred cases are counted.

Cases are reported from the beginning to the end of the outbreak.

Reliable demographic data can be hard to get. Often, there are no public records. Be aware of over- and underestimations, depending on the source.

It is important to get the most accurate possible data. Compare the data from several different sources. Justify the choice of data used, and give the source. There should be consensus among the main partners.

For example, demographic data from an old census can be used by applying the hypothetical annual population growth rate.

Local authorities may have more recent population figures than those available at the national level.

Everyone involved in managing the outbreak must use the agreed-upon population data until the en of the outbreak.

This is the descriptive stage of the outbreak investigation. The situation is described in terms of time, place, and person.

The data are transferred chronologically from the data collection tables (Appendix 6) onto a graph. The epidemic curve obtained represents the distribution of cases by date of diagnosis (Figure 3.1).

This curve allows confirmation that there is an outbreak. If it is completed on regular basis, it also helps monitor the time course of the outbreak and assess the efficacy of the response. 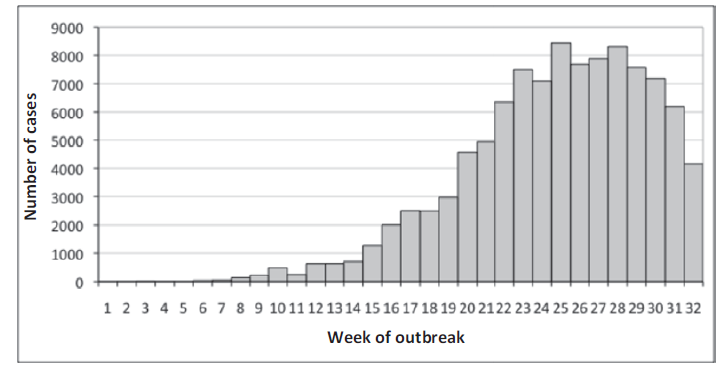 The geographic distribution of cases or specific attack rates by geographic area (district/ neighbourhood/town or refugee camp section) helps visualise the extent of the outbreak and identify the highest risk areas, in order to set priorities in terms of response.

While it is essential to determine the age of the cases, gender may also be a consideration.

The hardest-hit age groups are identified by calculating the age-specific attack rate. This indicator is critical in defining the target population for the vaccination campaign.

If the available demographic data do not include the distribution by age group, it is often possible to calculate it from the total population and national data used by other programmes (e.g., EPI). Failing that, use the standard population distribution (Appendix 7). 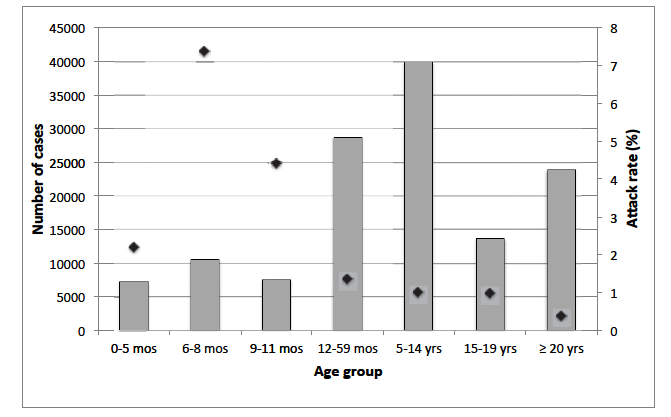 Analyse these data to:
– determine the speed with which the outbreak is spreading, and its size (epidemic curve);
– identify the at-risk populations (age groups and place);
– plan and adjust the response, in order to limit the number of deaths and cases and the spread of the outbreak (estimate the needs in terms of treatments, vaccine doses, etc.).

This is the speed with which a disease appears in the population during a given period. It is calculated each week during an outbreak.

The attack rate is a particular form of the incidence. It is a cumulative incidence, calculated over a short period of time – since the start of the outbreak, in particular.

The case fatality rate (CFR) is the percentage of deaths among cases of a disease. It is an indicator of the severity of the disease and the quality of patient management.